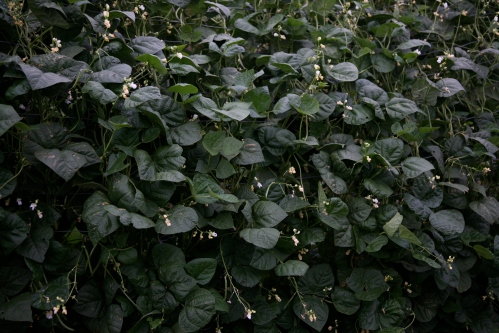 I’ve dug up a few interesting farming-related articles from around the web: how high food prices can hurt — or at least not help — third world farmers, what Wal-Mart, cancer, and organic produce have to do with local farming in my hometown of San Diego, and when agricultural conservation gets contentious in New Jersey.

And finally, as promised, the optimist’s version of our two-week vacation from the farm:

In our absence, the farm went from a vegetable patch to a vegetable jungle. The quinoa now towers as tall as I do, brimming with proto-grain. Remember when, three months ago, I dreamed of a bean thicket? Well, now I’ve got one — an impenetrable green mass whose weight has managed to partially collapse its fencing. And the winter squash field — oh, the winter squash field! Green jack-o-lanterns, three times the size of my head, lie casually in the dirt. A French variety of yellow pumpkin — which looks as if you took a bright yellow globe and squeezed it at the poles, so it’s slightly wider than it is tall — bursts through the green vines with an unexpected splash of color. The textures, colors, and sizes of the squash are all different, all energizing: the ribbed delicata; the smooth, ovular spaghetti; the pear-shaped butternut; the pleasingly round kuri. (There are also a few mysterious hybrids, such as the one that’s shaped precisely like a spaghetti squash but is ribbed and dark green, like an acorn. What will it taste like? Only time will tell.)

Yes, a few of the mysteriously diseased squash plants died, but a couple of them are reminding me of… oh, I don’t know, pick some great hero, Hercules in the Augean Stables myth, or Queen Elizabeth I resolutely refusing to wed, or Mel Gibson in Braveheart, or something.

This one could not be more gallant, stolidly hanging on just long enough to put all of its energy into a small-but-perfect kuri squash: 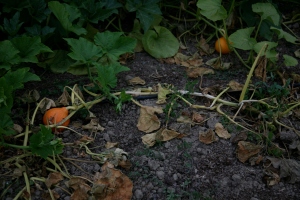 So these are the upsides. And more good news: at today’s market in Windsor, we made more money than we ever have before. We still haven’t added up all of our numbers to see if we’ve actually paid off our investment costs yet, but I’m not going to let that dampen my spirits! Instead, I’m going to drink a locally-brewed beer and toast to all of the wonderful customers who’ve helped us out — by coming back every week to see what we have, by telling friends, and for all the little things, too, like getting excited about purple bean recipes and armenian cucumbers.