When purple beans blossom, their flowers are a lovely shade of lilac. The stems are purple; the green leaves are edged in purple, too.

And boy, do these babies grow. They handily out-grew our Blue Lake Beans (a classic, tender green variety), and beat the Blue Lakes to the top of the fencing — and then, just to be sure that their victory would remain uncontested, they out-grew the fencing, too, waving several feet of vine in the air and in some cases growing back down the fence.

In terms of pests, the cucumber beetles did attack them and make lace out of their first two leaves. But they recovered quickly and put out leaf after leaf until the cucumber beetles couldn’t possibly eat them fast enough. Although our clay soil holds moisture, especially since it’s on a drip system, these guys had no problem with ‘wet feet’ — they grew splendidly. (By contrast, we found that Blue Lake was more likely not to recover from the cucumber beetle attacks, and more likely to stunt in over-wet conditions.)

The variety we grow is an Illinoian heirloom variety from Seeds of Change: Dow Purple Podded Snap. (We’ve also had success with purple bush beans, but that’s another post.)

Fast-growing, hardy, beautiful, and somehow gourmet because they’re purple, these beans are tough to beat! I give Dow Purple Podded Snap two thumbs way, way up.

It’s not one hundred percent pest proof, but it’s pretty darn good. While our brassica mix attracts flea and cucumber beetles like none other — which I found interesting, since it’s considerably more spicy and slightly tougher than this mix — our awesome Johnny’s Seeds lettuce mix is surprisingly resilient and mostly beetle-free. It’s got lots of fancy-sounding varieties in it (Rouge D’Hiver, anyone?) but mostly it boils down to: curly red, curly green, (both of which are great for loft, i.e. fluffing up your salad bags), flat red and flat green. All are quite beautiful, and the “flat red” are slightly mottled — a beautiful red-and-green color blend.

Despite the summer heat — note: we water with one-foot-tall misters, but only sprang for shade cloth for a fraction of the space — the salad hasn’t yet bolted. It can easily be cut (and come again, as they say) three times without getting too tough or bitter. It takes about four weeks until it’s a harvestable size (three with lots of water and lots of heat), but regrows very quickly. I find that the flat leaves grow, and regrow, much more quickly than the curly. (Same as curly versus straight hair, I guess.)

Main thing to watch for this with this crop: weeds. (You can spot a few grasses and one wild mustard in the photo above.) But if you’re growing for home use, the weeds shouldn’t be too big of a problem — if you’re picking on the scale of one dinner at a time, you can easily pick them out while washing the leaves. For a commercial scale (even a small one), we have to spend a couple of hours a week pulling out mustards and grasses… otherwise it’s a painfully slow harvest, come Saturday morning, as we pull weeds out of each handful we snip.

One other thing to watch for, thanks to the overhead misters: slugs, which love all things damp. I’ve caught a few on the leaves, but they were really small, and I haven’t noticed too much slug damage.

Note: the organic version of this mix is called “Encore,” and the conventional is called “Allstar.” The conventional is considerably cheaper, and I think we settled for that the second time around. We always go for non-treated seeds, but I’m still torn about whether or not the seeds themselves need to be grown organically. Yes, I obviously believe in organic agriculture — but in terms of my end product, how much can one lettuce seed carry in terms of residual chemicals, etc? If the lettuce you’re eating is grown with only organic inputs, isn’t that good enough? Hopefully in the future we’ll be saving our own seeds, eliminating this discussion altogether — but it’s still some food for thought. 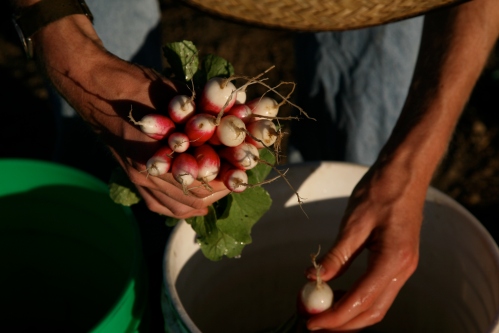 They’re radishes, only slightly less boring.  Oblong, with a pink base fading to a white tip, occasionally they have a pretty blush of pink inside when sliced in half lengthwise.

Are they truly idiot-proof to grow?  Pretty much.  A few growing notes:  flea beetles will punch holes in the tops, but who cares?  They’re a bit hairy for my tastes anyway.  Also, if these radishes are faced with especially cloddy clay soil (ahem, not that we would ever have anything like that) about 5% of the crop will look like commas, with ingrained-dirt evidence of scraping against some hard clod or rock.  It’s not a big deal, and we eat the commas–if they’re particularly warped/stained, we just don’t sell them at market.  (And like I said, it’s only about 5% of the radishes anyway.)

Growing tip:  companion-plant them with beets (a double, close-by row), in their own row 2-3 inches away from the beets.  Since the radishes are harvested in just a few weeks–compared to beets which take longer to bulb–they don’t interfere with one another, and it saves you the work of preparing a separate bed for the radishes. Also (and I’m not sure if this really helps or not because I haven’t harvested a just-radish bed and a radish-by-the-beets bed at the same time and taste-tested), the beets afford the radishes a modicum of shade by the time they’re bulbing, which might keep them a touch cooler, which might make them a bit less spicy.

I think it’s safe to put the Armenian cucumber in the ‘successful’ category now, although I might be jinxing myself here.

The winter squash may be dying, but the Armenian cucumber is as healthy as can be. (Knock on wood.) Heck, we keep stepping on the tendrils that spill over into the path–they keep growing back like some Swamp Thing. And the cucumbers themselves are somewhat beyond belief: you blink and a three-incher has turned into a two-footer.

At the market, although we didn’t sell all of them (the ten percent rule seems to be in effect for our cukes and zuchs — the farmer’s market adage you’ll never sell the last ten percent of your produce because people don’t like buying what seems to be the leftovers), people kept asking about them. (“What is it?” was the most common question.) And I’d say that a third of the people who tasted them–we had a sample dish out–ended up buying them.

Points for the Armenian cucumber:

Try it! But know that they will sprawl all over the place, even if you’re trying to trellis them, unless you’re really on top of your pruning. (Of course, we aren’t.)

It’s not something I ever would have thought of growing myself. But when Emmett and I were wwoofing on a small family farm in New Zealand, our hosts had a few quinoa plants going. They were healthy, bushy, beautiful things, and their grains were just starting to dry.

So, when we were on our online seed-spending spree a few months ago, we thought ‘why not?’ and ordered some Temuco Quinoa. It sounds fancy — and I went most of my life never having heard of quinoa — but it’s pretty practical stuff. It’s one of the few plant-based complete proteins — a protein that has all 8 amino acids. As such, it’s especially useful for a mostly-vegetarian like myself. (Other sources of complete protein include: spirulina, amaranth, soy, buckwheat, and hempseed, but I’m really not too sure how to serve some of those guys, besides blending them into some disgusting protein shake.) Quinoa’s also really pretty when cooked. The little hard seeds, once boiled/simmered sufficiently, burst open into tiny white spirals. They’re a pretty and healthy addition to soup–just throw ’em in 15 minutes or so before your soup’s done–and can make a nice side salad on their own, with some seasoning and veggies thrown in.

But back to the growing side of things. So far, so good: the plants have proved quite hardy. Sure, the cucumber beetles munched the leaves a bit, but let me tell you these plants looked absolutely wretched when we transplanted them. They were victims of our seed disaster–stunted, tiny things with only a couple of leaves apiece–and it was only Emmett’s deep-rooted sense of optimism that led us to put them in the ground at all. Good thing we did! They’re now hip-high bushes, vigorous and a pretty shade of grey-blue-green, and they’re starting to form buds. We’ve barely had to weed them–once they got going, they quickly shaded the weeds out–and water them about once a day. They haven’t minded our slightly soggy clay soil one bit. My only complaint: the stalks are on the brittle side, and break easily. But really it’s our fault for planting them too close to the chard row, which we harvest a lot (which means I sometimes back into the quinoa while trying to snip chard leaves and avoid stepping on the chard’s floating row cover, which we take off and put on the ground).

I’m excited for a quinoa harvest. If it’s successful, this might be something I plant in bulk in future years. It’s not too often you see grains at the farmer’s market, and I’m guessing people might be excited at something unusual like locally-grown quinoa. (I also have a hunch it might make an awesome protein supplement for chickens, but I’ll have to try that out first.) It’s a good storage crop; we’ve kept store-bought quinoa for close to a year without any sort of problem. Since most of our sales right now are in salad and chard, I can’t wait for something that doesn’t have to be harvested day-of-market!